Welcome to the World Cup…of Healthcare

What if the World Cup teams competed on the strength of their healthcare systems, rather than their soccer programs? The winner would be determined by how much of a spending burden each country places on its citizens.

As soccer fans and healthcare junkies, we were intrigued by the question, what if the World Cup were played between national healthcare systems, rather than national soccer teams? We analyzed spending, outcomes, and health system structure of all 32 countries competing in the 2018 World Cup and simulated the results of the competition if results were based on health system performance—specifically value delivered to each country’s citizens. Unsurprisingly, the outcome was slightly different than what oddsmakers are predicting for the tournament, but not as far off as you’d think. Here’s how we did it, and what we found:

We looked at two dimensions of national health spending, using data from the 2016 Global Burden of Disease (GBD) project. First, we looked at total national health expenditure per capita, to get a sense of how much each country spends per citizen on health. We also looked at out-of-pocket spending per capita on healthcare for each country, a measure of how much of the burden of health spending each country’s citizens bear. To control for the disparities between relatively rich and relatively poor countries, we compared the ratio of out of pocket spending to total spending—again, on a per-capita basis.

To get a sense of outcomes, we chose two metrics. First, we looked at life expectancy. We also compared countries using a particularly interesting metric calculated by the Global Burden of Disease team—the Healthcare Access and Quality (HAQ) index. This measures mortality amenable to personal healthcare—essentially, excess deaths that should not be fatal in the presence of effective medical care.

Here’s the group table for the 2018 World Cup, with the healthcare performance statistics added in:

We then categorized each country’s health system into one of four types, depending on the organizing principle of the system. (Think of this as a country’s soccer formation—healthcare funding mechanism rather than 4-4-2 or 4-5-1.) Here, we used the categorization suggested by the author T.R. Reid in his excellent 2010 review of global health systems, The Healing of America: A Global Quest for Better, Cheaper, and Fairer Health Care. Reid summarized the work of a generation of health experts and policymakers, suggesting that there are four basic models of healthcare systems worldwide:

Most countries operate hybrid versions of the above models. As many analyses have shown, wealthier countries that spend more on healthcare tend to have moved to more organized systems, in which coverage is universal and care is funded by a national healthcare payer. Looking at the data from our 32 World Cup teams, two trends become clear. First, higher spending per capita clearly yields better outcomes for the population—there’s a strong relationship between spending and the HAQ index.

Second, and more interestingly, the share of total spending borne by individual citizens seems to matter a lot. On the right, we plotted the percent of per capita health spending that comes out of pocket against the HAQ index. As you can see, systems that lighten the out-of-pocket burden by using some form of national, universal coverage approach clearly do better in terms of lower mortality. Asking your citizens to shoulder the burden of paying for care puts you at a competitive disadvantage, compared to countries with more generous systems—even if your country has a bigger economy.

You can see this illustrated in the charts below. We’ve highlighted the outcomes of a few World Cup competitors, and have also called out the US system for comparison. As we know, the US spends way more per capita than other countries, with results that aren’t as good. But given the overlapping coverage mechanisms of Medicare, Medicaid, and private insurance—and the impact of our recent coverage expansion—we compare relatively favorably in terms of out-of-pocket share of total spending (although the absolute amount paid by individuals in the US is larger, given our overall higher costs). 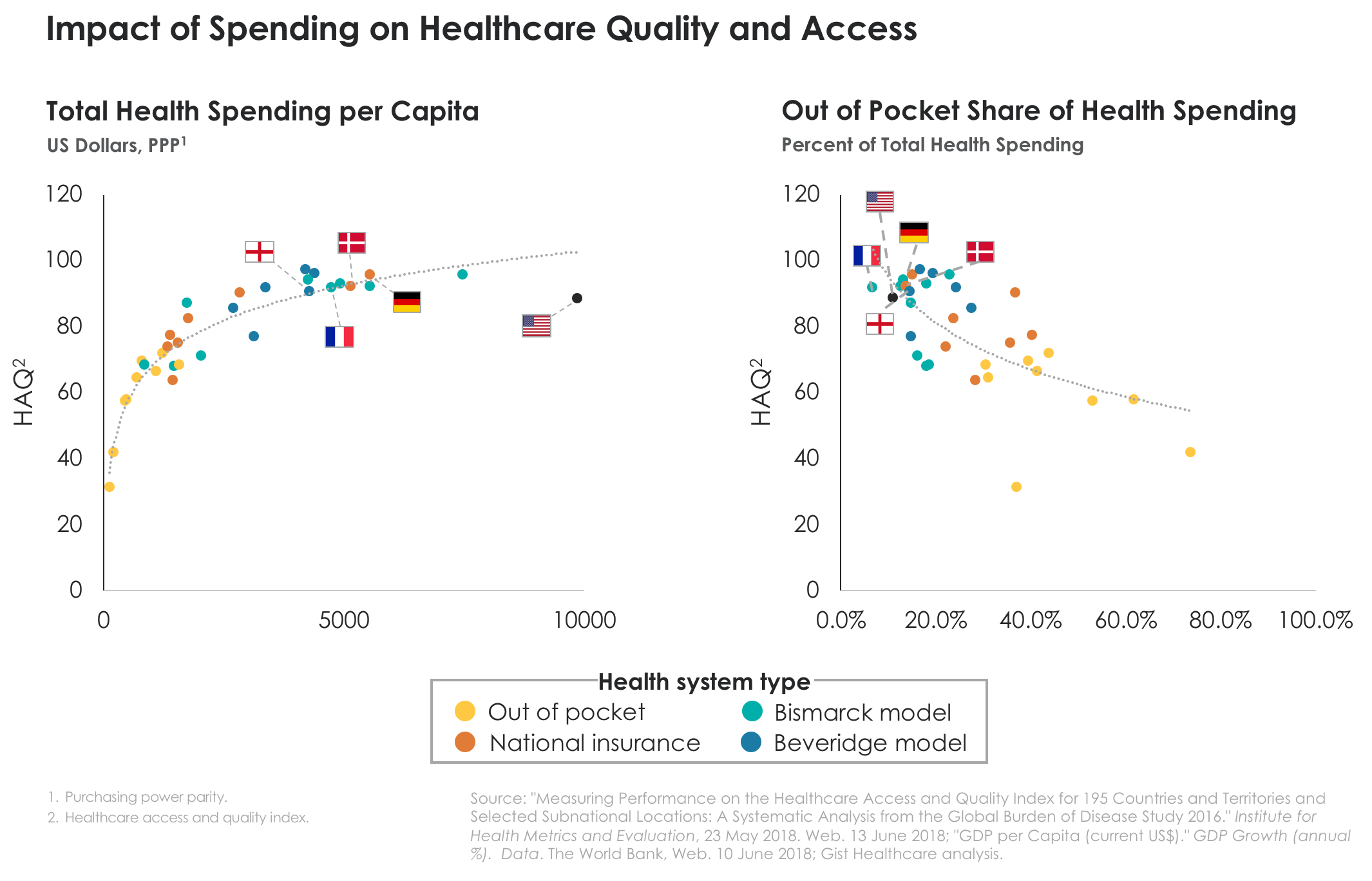 Time to put our teams out on the pitch! Using the 2018 World Cup groups, and the single-elimination rounds that will be played across the next month, we compared head-to-head healthcare performance of our 32 competitors. To determine winners, we constructed a Consumer Value Index, calculated by adding together the HAQ index and our measure of life expectancy. (This double-counts life expectancy to a certain extent, but we wanted to give “credit” for the knock-on effects of the HAQ’s mortality measurement, such as increased productivity and better quality of life.) We then divided that sum by the out-of-pocket share of total health spending per capita—again, how much of the per capita health expenditure is shouldered by each citizen. The Consumer Value Index thus measures what each citizen “gets” for their money spent on healthcare.

Here’s how the tournament plays out: 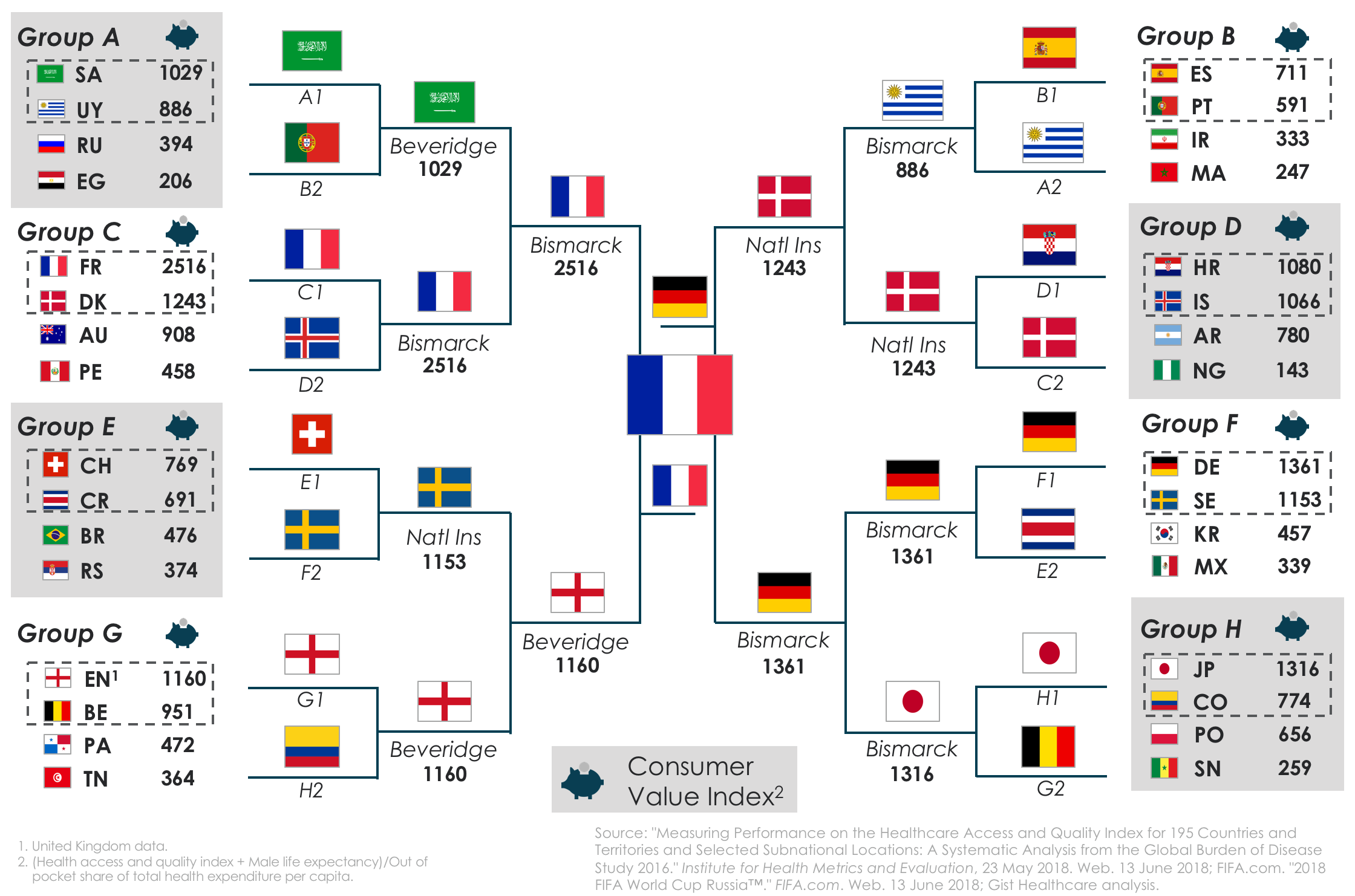 Our Healthcare World Cup diverges from the real thing in a number of obvious ways. Obviously, it favors the more developed countries that have deployed more advanced healthcare financing schemes that lighten the burden on its citizens. This puts countries from Latin America and Africa at a particular disadvantage—in particular, soccer powerhouses Brazil and Argentina don’t even make it out of the group stage in our tournament. (Conversely, Saudi Arabia makes it to the quarterfinals—an unlikely outcome given their dismal performance in the Cup’s opening game!) Denmark is a Cinderella story in our tournament, thanks to their robust national insurance model and long life expectancy—even though oddsmakers put them at 100-1 to hoist the Cup.

Uruguay is an interesting competitor in our version of the tournament, making it to the quarterfinal before losing to the healthy Danes. While the country of 3.2M has a publicly-funded safety net system, most Uruguayans are members of “mutualistas”, which are hospital-based membership programs that operate outside of traditional insurance. Most closely resembling the US’s concierge medicine model, these are essentially mutual-benefit societies that provide funding for a wide-range of health services organized by individual hospitals. Generally, the mutualistas only cover those under the age of 60. (In our tournament, Uruguay also benefits from starting in the “Group of Death”—literally, the group with the lowest average life expectancy.)

4. Why is France so much better?

The clear winner of our Healthcare World Cup is France. Les Bleus earned a Consumer Value Index score more than 1,000 points higher than their final-game opponent Germany. France has a respectably long life expectancy (79.2 years for males, the 7th highest among Cup competitors), and earns a Healthcare Access and Quality score that’s 10th-highest in the bunch. But the secret to their dominating performance is how low each citizen’s out of pocket spending on healthcare is, relative to total spending on health in France.

France has had mandatory universal coverage since 2000 and has been steadily moving from its traditional Bismarckian system toward a National Insurance model. Financed through payroll and income taxes, the French system features statutory health insurers (SHIs), whose policies citizens purchase on a national exchange. Private, top-up coverage is available, and covers excess charges from providers beyond what’s covered by SHIs. However, excess charges have declined in recent years, thanks to an agreement by providers to limit billing beyond the official reimbursement rate. (Think of this as a voluntary cap on balance billing.) Most of the out-of-pocket spending on care at this point in France is on vision and dental care, with most other healthcare costs covered by the national insurance plans. In recent years, France has focused heavily on cost containment, to ease the tax burden of the SHI scheme; this effort has included centralized negotiation for supplies and drugs, a reduction in excess hospital capacity, and price cuts for diagnostic services.

Our key takeaway from the Healthcare World Cup simulation is that limiting out-of-pocket spending on health is a key success factor for national health systems. While the French team on the field may not fully reflect the fruits of France’s excellent healthcare system—indeed, much of the squad hails from Francophone Africa—their fans back home can take comfort in the fact that, at least in our tournament, their team is destined for victory. And thanks to their country’s health system, they’ll find a few extra euros in their pockets to spend on bière and frites as they celebrate.

Oh, by the way…we had been betting on Spain to win the Cup this year, until the untimely firing of their coach this week. At this point, our choice is clear.