1. Walmart has been testing and refining retail clinics and other healthcare services over the past decade, but has yet to pull the trigger on a broad offering

Back in 2014, every sign pointed to Walmart jumping into healthcare in a big way, starting with a major revamp of their retail clinic strategy. The company had partnered with a handful of health systems over the years to build in-store clinics, but Walmart had been decidedly hands-off in their operation. Health systems described the partnership as a leasing arrangement rather than a joint operation. Unimpressed by the performance of the clinics and their potential to bring foot traffic into the stores, Walmart shifted its strategy toward building fully-owned and branded clinics.

The first clinic of this kind launched in central Texas with a broader value proposition, moving beyond minor acute care toward comprehensive primary care. Staffed by two nurse practitioners, it offered a broad set of services, including basic chronic disease management, onsite labs and specialist referrals, for a cash price of $40 per visit. For Walmart employees, the same services were priced at just $4.

Members of their healthcare leadership team made bold growth statements at the time. We heard their then-president of health and wellness speak at a conference, at which he projected that Walmart would have primary care clinics in 3000 of their stores within five years. Four years later Walmart has just 19 of these clinics operating in Texas, South Carolina and Georgia, with no announced plans to add more. 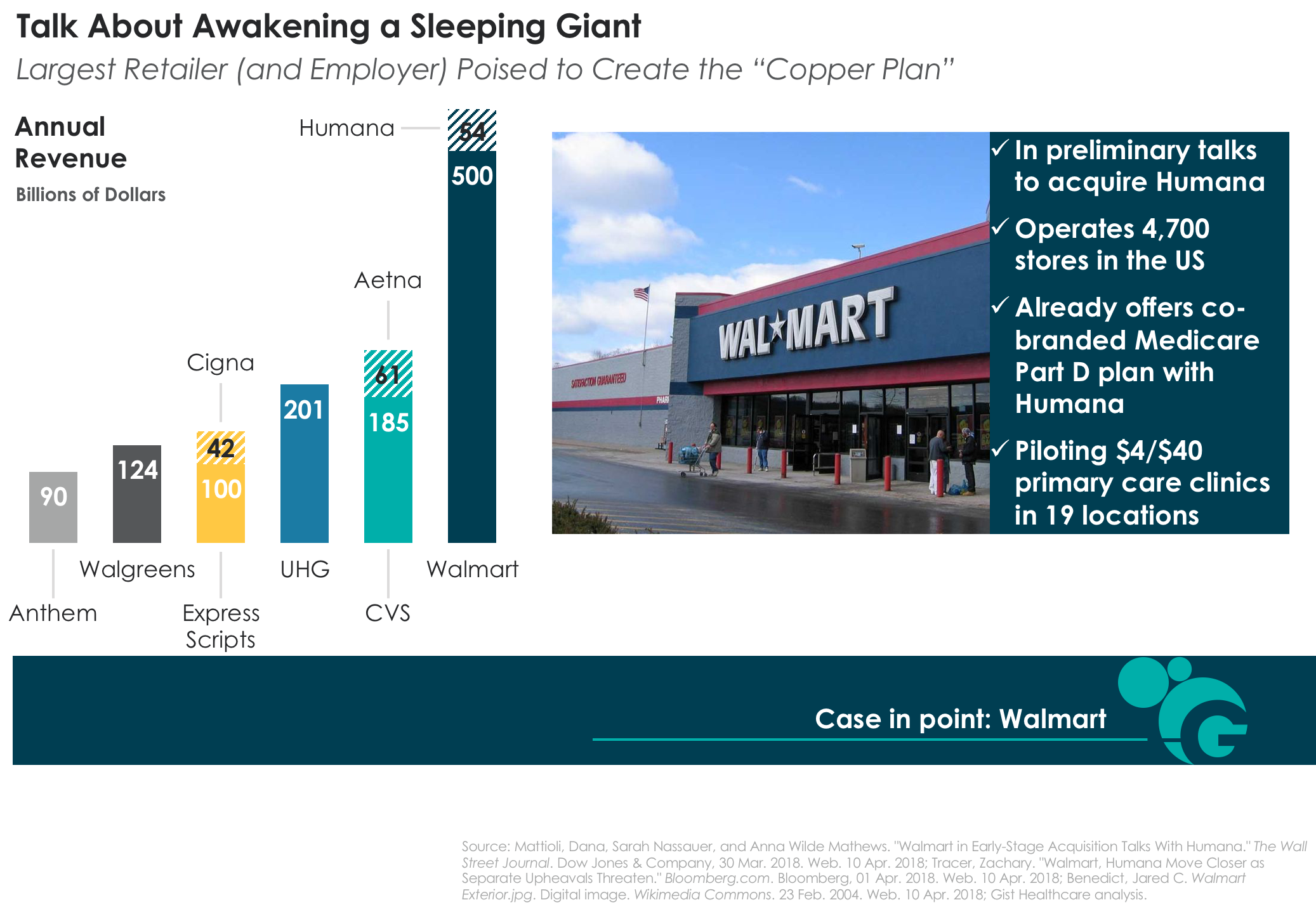 You can spend hours following the trail of internet rumors of Walmart’s moves into healthcare. Did you hear the one about Walmart putting MRIs in thousands of stores? We did. Supposedly they would price them at $400, and they expected to make money on the scan itself as well as the increased foot traffic it would bring. What about consumer-focused chronic disease bundles for conditions like diabetes, which would include testing supplies, generic medications and care in Walmart clinics for a set price? Walk into a store today and you still can’t buy that.

Indeed, none of these big ideas have come to fruition. But it would be a mistake to underestimate Walmart’s ability to strike when they think the time is right. Each venture has been a learning experience: can we make money on the service alone, or is the value captured in other parts of the business? Can we operate it ourselves, or should we partner? How will consumers respond? Over the past decade Walmart has amassed a huge amount of healthcare knowledge and is getting ever closer to a plan to compete in the space.

2. Walmart used to think about healthcare like any other retailer, but these five insights show how they’re getting serious about it

Over the past several years, we’ve had a few opportunities to talk to leaders on Walmart’s healthcare team. While their strategy (and the executives involved) seem to change from year to year, we’ve been able to piece together how they think about opportunities in healthcare, and their ability to compete against doctors and hospitals:

Walmart leaders believe they can directly make money on a lower-cost healthcare product, but are motivated by other, larger reasons for getting into the space. Walmart’s team was optimistic that a $40 primary care visit could be profitable on its own. But the ability to capture other returns drove their move into the space. Like other retailers, they view healthcare as an in-person service that will increase foot traffic into their stores, providing an opportunity for cross-sell. This was the primary motive behind their 2014 primary care strategy. At that time, Walmart was facing the rise of Amazon and other online retailers. They didn’t need more stores (90 percent of Americans already live within ten miles of a Walmart), but were looking at an array of services (healthcare, banking and gas stations) that would cause customers to visit the store more frequently.

If Walmart can reduce out-of-pocket healthcare spending, they see the potential to free up more dollars to be spent on everything else they sell

Walmart is also looking to benefit more broadly from reducing overall healthcare spending for their core customers. Walmart’s average customer is 51 years old and makes $56K a year. This demographic has been hit hard by rising deductibles and out-of-pocket expenses, and Walmart believes that’s reducing overall disposable income. If Walmart can reduce out-of-pocket healthcare spending, they see the potential to free up more dollars to be spent on everything else they sell. One executive we spoke with estimated that easing the burden of healthcare spending could allow Walmart to increase sales by 3-5%, which would be an enormous gain.

Walmart delivers “everyday low prices” through relentless cost management—and they will measure any healthcare investment against the ability to use those dollars to lower costs elsewhere. Ask any vendor who has worked with Walmart and they’ll tell you that no company is more focused on managing supply chain and driving out cost wherever they can. A Walmart executive told us that the ethic of reducing prices for their customers is how they would evaluate any investment, including healthcare. Would a dollar spent on a new clinic concept deliver a return that translates into lower price or more efficiency, or would it be better spent just cutting prices in the store?

They learn from their partners—then build those capabilities themselves. Walmart’s retail clinic history illustrates how they form, learn from and exit partnerships. In their first foray into retail clinics they learned that health systems are complex, slow-moving organizations that don’t easily make decisions or change direction. And they discovered that doctors are expensive and hard to work with. Having learned from experience working directly with traditional providers, they moved on.

In shifting to more comprehensive primary care they partnered with QuadMed, a worksite clinic provider, to staff and manage their clinics. A Walmart executive told us that this partnership wasn’t ideal either: Walmart wanted dozens of visits a day, but QuadMed didn’t share their incentive to grow volume. Exiting this partnership (again, after learning what they needed about how QuadMed did their work) and bringing staffing and management in-house likely slowed down Walmart’s clinic expansion. But surely they’ll apply those learnings to their next iteration of investment.

Expect any Walmart strategy to center around the pharmacist. Walmart will tap into the captive healthcare labor they have in every store, the pharmacist. Expect them to take a lead role in chronic disease management (Walmart recently announced they’re investing $11B to upgrade pharmacies, including building pharmacist consultation rooms), and to try to build deeper relationships with their pharmacy customers. The partnership with Humana—which already cobrands a drug plan with Walmart—will likely include a much more prominent role for pharmacists as care managers for Humana’s Medicare Advantage enrollees.

Walmart has the ultimate testing ground for new healthcare ideas—their own employees. As the nation’s largest employer, Walmart has had a vested interest in reducing health care costs for their 1.5 million associates. They’ve attempted to manage high-cost specialty care through a nationwide “center of excellence” strategy. In 2012 they partnered with six leading health systems to purchase spine, joint, cardiac and other high-cost procedures for a fixed, bundled payment for episodes of care for their employees. In recent years they’ve also expanded into ACO-like relationships with a handful of health systems, sharing risk for the total cost of care. Even if the number of employees in these programs remains small, the company is surely learning a great deal about how to manage healthcare cost and quality, how to build a high-performing network and evaluate provider performance.

To fully garner returns on healthcare, Walmart likely needs one other key capability: an insurance partner that allows them to sell their low-cost network directly to consumers and create incentives for patients to use “Walmart care”. They’ve dabbled in the insurance space before. Four years ago they partnered with DirectHealth, an online insurance brokerage, to assist customers in-store or online in choosing Medicare Advantage and ACA marketplace plans. While the partnership continues, it hasn’t grown into a huge business. But it’s likely provided insight into how consumers select health plans, and how Walmart may fit into a network.

Acquiring Humana provides Walmart the ability to not only directly sell insurance, but to link coverage to a low-cost network with Walmart’s primary care and pharmacy services at the center. As the country’s second largest Medicare Advantage provider (which is also doubling-down on postacute care and other assets targeted at managing aging seniors), Humana could be the ideal partner to create a low-cost healthcare ecosystem for Walmart’s customers as they age into their Medicare years.

While Medicare Advantage would be the main target of this insurance play, the combination would also be well-positioned to build an offering for individuals purchasing coverage on the Obamacare exchanges. Imagine a Walmart network product coming in as the lowest-cost option, a “copper” plan with care centered in their stores and low-cost, narrow referral networks.

If this new vision comes to fruition, hospitals and doctors should prepare to be disrupted. Walmart has the largest reach of any retailer—140 million Americans visit a Walmart every week. They could shift consumer loyalty away from traditional providers by delivering on-demand primary care in the stores and offering low-cost insurance products that steer those patients to Walmart-certified specialists and hospitals. It’s a fair bet they already have the data on which providers meet their bar in each of their markets. Walmart may be about to pull the pieces together to make “everyday low prices” a reality in healthcare.