What Trump Didn’t Say in the State of the Union

Despite temporarily “moving on” from efforts to repeal Obamacare for political reasons, the realities of the Federal budget will require Congress to take significant action to rein in spending on healthcare in the near future.

1. Full repeal and replacement of the ACA seems to be off the table.

It’s no surprise that President Trump did not rehash last summer’s effort on Capitol Hill to repeal and replace Obamacare. After all, that effort ended in defeat for Senate Republicans, despite having committed years’ worth of energy and political capital to the goal of reversing the ACA. And it’s true that as part of the tax cut bill, Congress did move to repeal the most unpopular component of Obamacare, the individual mandate. (Although the mandate won’t be gone until 2019.)

But any hopes that Republican policy makers harbored that Congress would return to the repeal-and-replace effort, as urged by leaders ranging from Paul Ryan in the House to Ted Cruz in the Senate, have suffered a blow with the President’s silence on the issue in a speech devoted to setting the legislative agenda for the coming year. Party leaders would likely prefer to head into this year’s midterm elections without wading back into the quagmire of repeal and replace. In effect, Trump seems to have declared victory with the repeal of the mandate, and Republicans are likely to move on to other issues.

In passing the tax cut without identifying ways to fund it, Congress has essentially just delayed the inevitable budget reckoning

Repealing the ACA wasn’t the only thing Trump didn’t mention. There was no talk of Medicare reform – despite Paul Ryan’s continued call for moving to a premium support model in Medicare. Even with broad popularity among the Republican base, there was no discussion of the welfare-to-work reforms currently being discussed in the Medicaid program. And there was no mention of block grants in Medicaid, despite the fact that all of the major legislative proposals last year (AHCA, BCRA, Graham-Cassidy) included Medicaid block granting as a centerpiece of reform.

Republican leaders have likely decided that these more sweeping reforms of the entitlement programs are simply too politically risky to take on, with midterm elections looming in November. The political calculus seems to be to delay taking on entitlement reform until after the midterms, and possibly until after the start of a potential second term of the Trump administration. For the time being, we’re much more likely to see piecemeal efforts to reform Medicare and Medicaid, largely driven by pilot programs and waivers administered by CMS and its Innovation Center.

3. Nevertheless, major cuts to the healthcare programs are nearly inevitable.

Last year’s major tax overhaul will likely add somewhere between $1T and $1.5T to the Federal budget deficit. In passing the tax cut without identifying ways to fund it, Congress has essentially just delayed the inevitable budget reckoning. And with President Trump proposing even further massive expenditures – calling for $1.5T in new infrastructure spending in his address yesterday – pressure to find savings in the budget will only intensify.

Those savings will almost surely come from healthcare programs. Defense spending is an unlikely source of savings – indeed, Trump again called for massive increases in military programs, and we’re facing serious threats around the globe. Social Security reform has long been a third rail for Congress. That leaves Medicare and Medicaid, which are only poised to add to the spending challenge in coming years as the Baby Boomers age into the program: 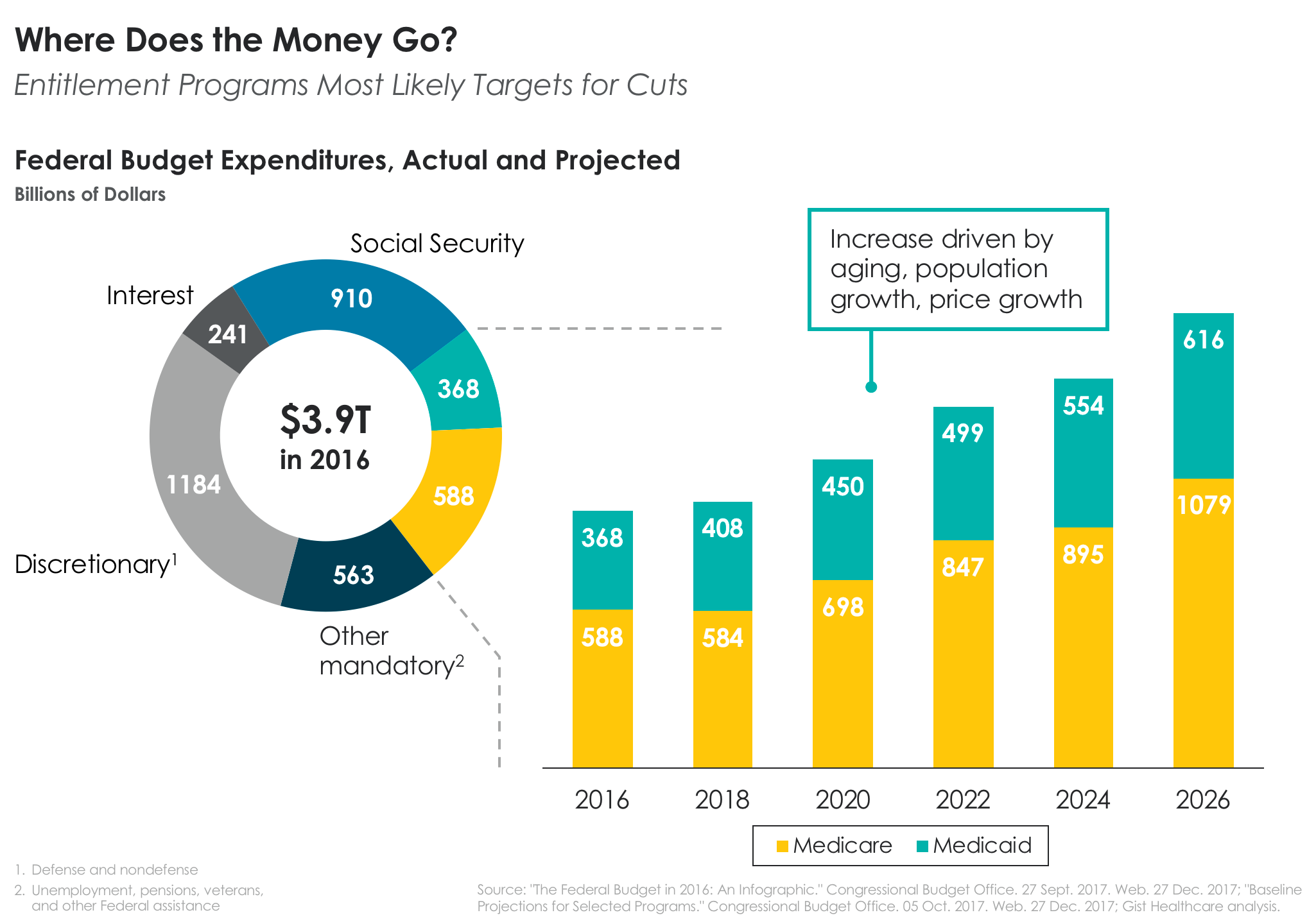 Even absent major overhaul of the entitlement programs, the sheer size of the tax cut’s impact on the federal deficit is expected to trigger automatic spending cuts in Medicare to the tune of $25B in 2018 alone. And those numbers will continue to grow.