How to Think About the Big, New Mergers in Healthcare

With the government signaling a preference for private market solutions to reducing healthcare spending growth, the recent merger announcements are just the first in a coming wave of fundamental realignments designed to disrupt expensive incumbent providers.

1. The mergers are a direct result of the election of the Trump administration.

While it’s impossible to know just what would have happened had the 2016 election gone the other way, surely at this point we would be knee-deep in discussions about how to bolster the Affordable Care Act, shore up the Obamacare markets, and begin to get aggressive about using the power of government regulation and alternative payment models to rein in healthcare cost growth.

But with the shift in political winds—and even without fully repealing the ACA—the government has stepped back from its interventionist approach to managing the burden of healthcare cost growth on the American economy. The order of the day is now deregulation, market-based solutions, and individual accountability for health spending.

And no surprise, the private market is beginning to generate its own solutions to addressing the structural issues that drive high healthcare spending. Witness the much-heralded announcement recently that Amazon is (finally) dipping its toe in the healthcare swamp. It’s clear where we’re headed now: if the government isn’t going to “solve” our healthcare cost problem (and it probably never was), then corporate players will take the reins instead. Watch for more big announcements of mergers and realignments, and even more “disruptions” to the traditional healthcare landscape in the months and years ahead.

2. One way to read the mergers—a battle for (Medicare) advantage.

Caring for the 80 million Baby Boomers entering the rolls of Medicare with our expensive delivery system presents the country’s greatest healthcare cost challenge. The Obama administration’s primary solution to this problem was to encourage provider to shift toward a lower cost delivery model, gradually entering the “total cost management” business via models like accountable care organizations (ACOs).

While over 600 provider organizations have joined the various tracks of the ACO program, it’s increasingly clear that the model does not present a long-term solution to the Medicare cost problem. Most providers remain in upside-only risk, while those who have moved to downside risk almost unanimously consider the ACO program a transition model. Many providers looking to move to deeper risk are considering some form of Medicare Advantage (MA)—either on their own or in partnership with an existing payer organization.

One way to read these big, new merger announcements is the beginnings of a new battle for high ground in the coming world of Medicare Advantage. What market posture will yield the greatest leverage in the effort to rein in Medicare spending via the private market? 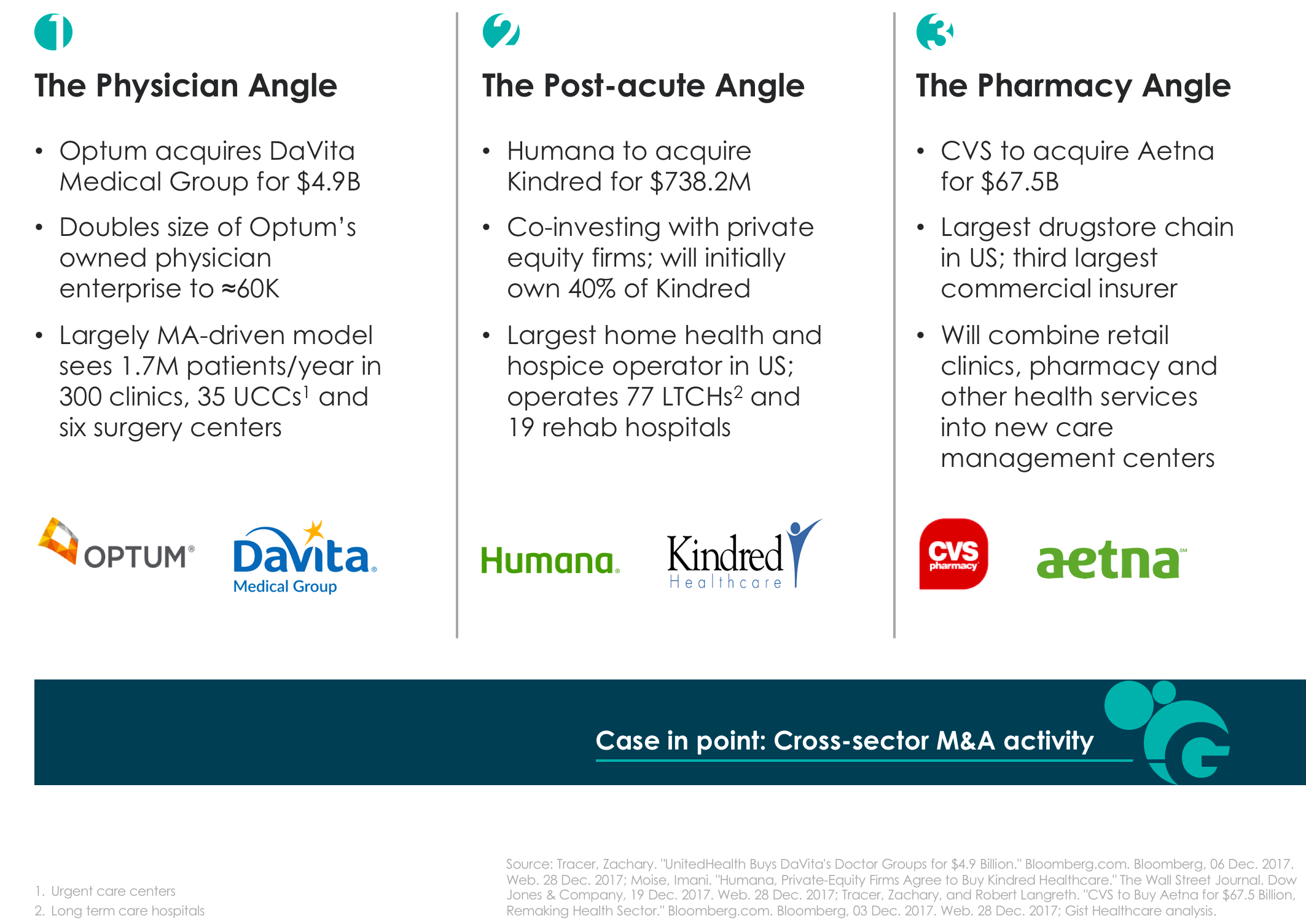 3. Who should be most worried about all of this? Hospitals.

There’s a lot of disruption built into all three of these competing visions for the future of the Medicare business. But one thing is common to all three approaches, and in general to the new ideas emerging from the private sector for how to reduce runaway healthcare spending. They’re all bets on reducing reliance on—and ultimately reducing payment to—traditional hospitals. (And along with hospitals, the armies of specialist physicians they employ.)

Even the kinder, gentler Obama-era idea of dealing the providers into disruption via ACO-like programs were ultimately predicated on the notion of reducing hospital spending—generating what one visionary health system leader once described to me as a “population health dividend.” The question is who captures that dividend, and how does it get spent? In the ACO vision of the world, the dividend (in theory) would be re-invested by providers in better access, better care management, and so forth. In the private market vision? Not so clear.

So how should hospital and health system executives be thinking about this new evolution in the marketplace? For starters, it would be better to engage early in partnership and cooperation with the new disruptors—be at the table rather than on the table. Some systems have found opportunities to collaborate with the retailers who might otherwise be encroaching on the traditional delivery business—witness Chicago-based Advocate Health Care, which is running the retail clinics inside Walgreens stores in their market. 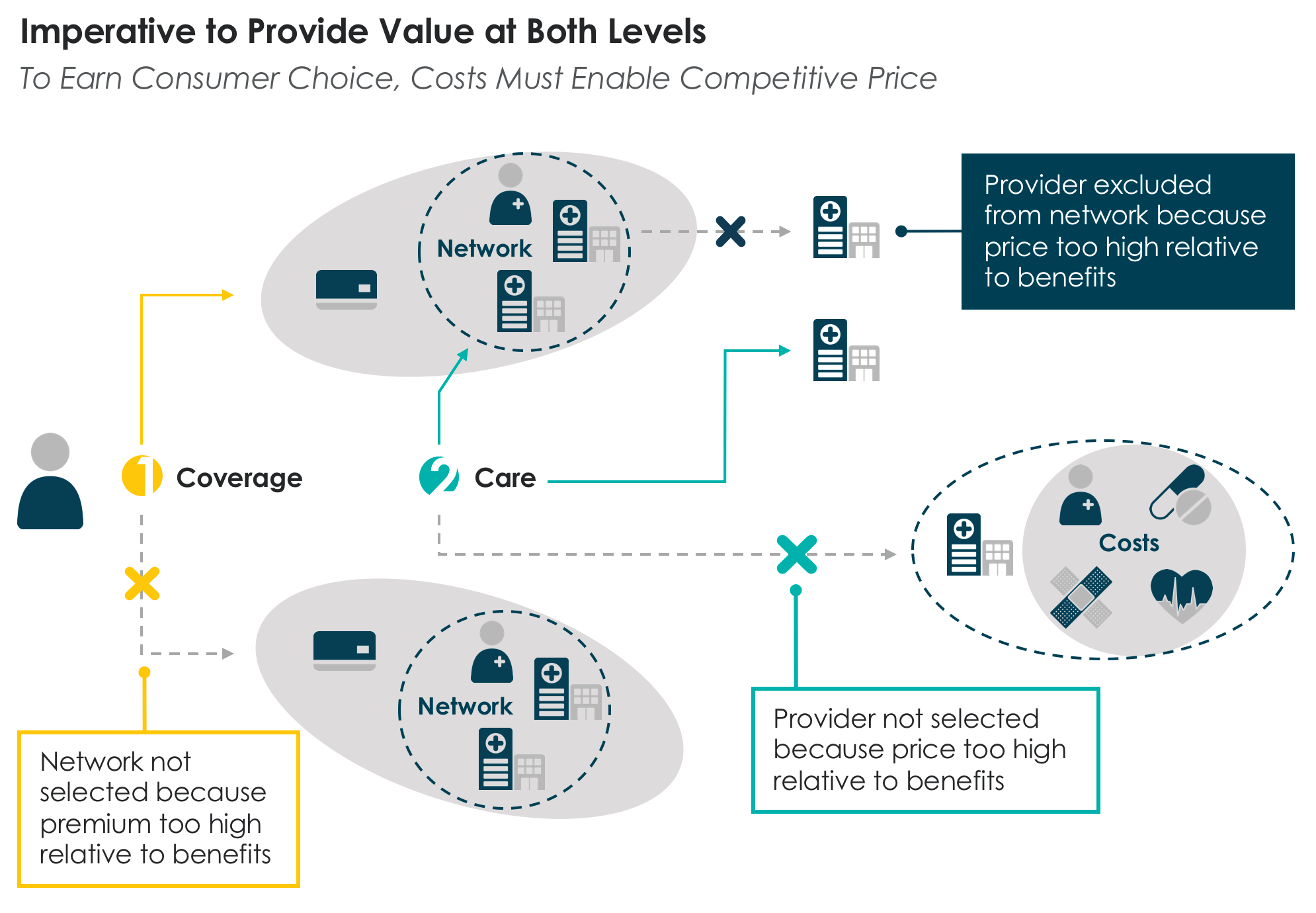 But ultimately, hospitals and their expensive specialists are going to have to find ways to lower the cost of the care they deliver, as the market shifts toward a Medicare Advantage-dominated model. The coming shift toward private market solutions will almost certainly result in much more intense price competition—both at the wholesale level (how do I get my costs down enough to get into the narrower MA networks?), and at the retail level (how can I compete with CVS on the price of clinical care?). These first few merger announcements should sound a lot like the shifting of tectonic plates beneath the feet of incumbent healthcare entities. Things are going to get a whole lot more interesting.