The Promise and Peril of Hospital Mega-Mergers

The recent trend toward health system consolidation and hospital mega-mergers has the potential to be positive for healthcare, as long as the logic of scale shifts from creating pricing leverage to creating value for consumers

1. Traditional hospital consolidation leads to higher prices for care—that’s a feature, not a bug

Economists and policymakers often express concern that mergers between hospital systems will result in higher prices, and there’s a lot of evidence to back that up. Indeed, a key finding in the research is that hospital consolidation does little to improve quality, reduce cost of care, or enhance service for patients. For the most part, the only measurable outcome of mergers between hospitals has been increased rates.

This shouldn’t be surprising. Not only do prices go up when hospitals consolidate in a market—that’s really the only reason multi-hospital systems exist in the first place. While there has been a good deal of consolidation across the past few years, the biggest wave of hospital mergers came in the mid-to-late 1990s in the backlash against managed care. As states began to pass “any willing provider” and “patients’ bill of rights” laws in response to consumer dissatisfaction with restrictive HMO policies, insurers lost their ability to control cost growth through care management and referral management strategies.

The shift to broad-network, PPO-driven healthcare created a zero-sum game between hospitals and commercial insurers in most markets. If insurers couldn’t hold down price by controlling referral patterns and restricting utilization, the only strategy left was leverage. Hospitals are a fixed-cost business, meaning that the key to their success is keeping utilization high. Insurers aggregated “lives” through consolidation, so they could use their scale to demand lower rates from hospitals. In turn, hospitals began to seek mergers with in-market competitors in order to become “must have” in insurer networks.

What resulted was a rapid consolidation in most markets—three or four “health systems” battling it out with two or three commercial payers in an annual negotiation over rates. The whole point of consolidation—on both sides of the negotiating table—was to aggregate enough scale (beds on one side, lives on the other) to drive to a better outcome on price. In most places across the US, healthcare has become a “bilateral monopoly”, with payers and providers locked in a playground-logic game of getting bigger to more effectively beat up on the other guy.

2. The healthcare marketplace is changing—and the logic of consolidation is changing, too

In most markets insurers and hospitals arrived at a stalemate at some point in the last decade. Further consolidation on either side began to result in legitimate antitrust concerns. Locked in a virtual standoff with insurers, providers’ prices again began to rise in the mid-2000s—very often, hospital executives would tell me during this period that they were enjoying 8-10% annual price increases on the commercial side of their businesses.

Insurers have made occasional forays into network management, attempting to sort hospitals into price “tiers”, and using their benefit structures to steer enrollees to lower-cost hospitals. But efforts here are half-hearted, and there hasn’t been a strong incentive to put teeth into these networking strategies—instead, insurers discovered they could simply price ahead of rate inflation from the providers. During the period that hospitals were getting 8-10% rate increases, insurers commanded 10-15% premium increases from employers.

For consolidation to pay off, the logic behind mergers must shift from price growth toward true value creation

Now the logjam appears to be breaking. After a relative lull, consolidation has returned to healthcare. There’s been a change in thinking among hospital executives about consolidation, however, and it would be a mistake to simply condemn recent activity as a continuation of inflationary, monopolistic behavior of the past. For consolidation to pay off for hospitals moving forward, the logic behind mergers must shift away from price growth toward true value creation. Several market factors have changed providers’ motivations:

As a result, hospital leaders have begun to think about consolidation differently—it’s needed to capture efficiencies and economies of scale, and to create the kind of scope and competitive capacity necessary to thrive in a changing market environment. But consolidation can’t result in further increases in cost of care—the logic must reverse.

One indicator of this shift in thinking is the difference in the kinds of deals proposed in recent months. Rather than continuing to roll up hospital beds within a market, the new merger activity is more weighted toward cross-market deals. Cross-market mergers by definition aren’t motivated by a desire to increase negotiating leverage—because payer negotiations happen at a market level. Bringing two, non-overlapping systems together doesn’t increase negotiating leverage in either of their home markets (unless they share a regional payer). The logic must lie elsewhere, in producing competitive advantage to respond to a changing marketplace.

3. Further hospital consolidation is imperative, but deals must be oriented around creating value from increased scale

If continued consolidation among hospitals can’t be built around the logic of price increases, what considerations should health systems have in mind as they evaluate deals? I’d point to several ways in which scale could potentially create value in healthcare delivery.

Some of these sources of value are best maximized at a market level, others at a regional level (consolidation beyond the local market but still geographically contiguous), and some at a super-regional or national level (growth not necessarily tied to geography). Each increment of growth enables a new kind of value creation—as long as the growing system continues to drive the scale economies reaped at earlier stages of consolidation.

(That’s not a small point—as systems expand to become super-regional or national in scale, they often fall in to the trap of allowing local, market-level leaders to operate too autonomously. The “corporate-local” divide in many large health systems drives a huge amount of cost and inefficiency in larger systems.) 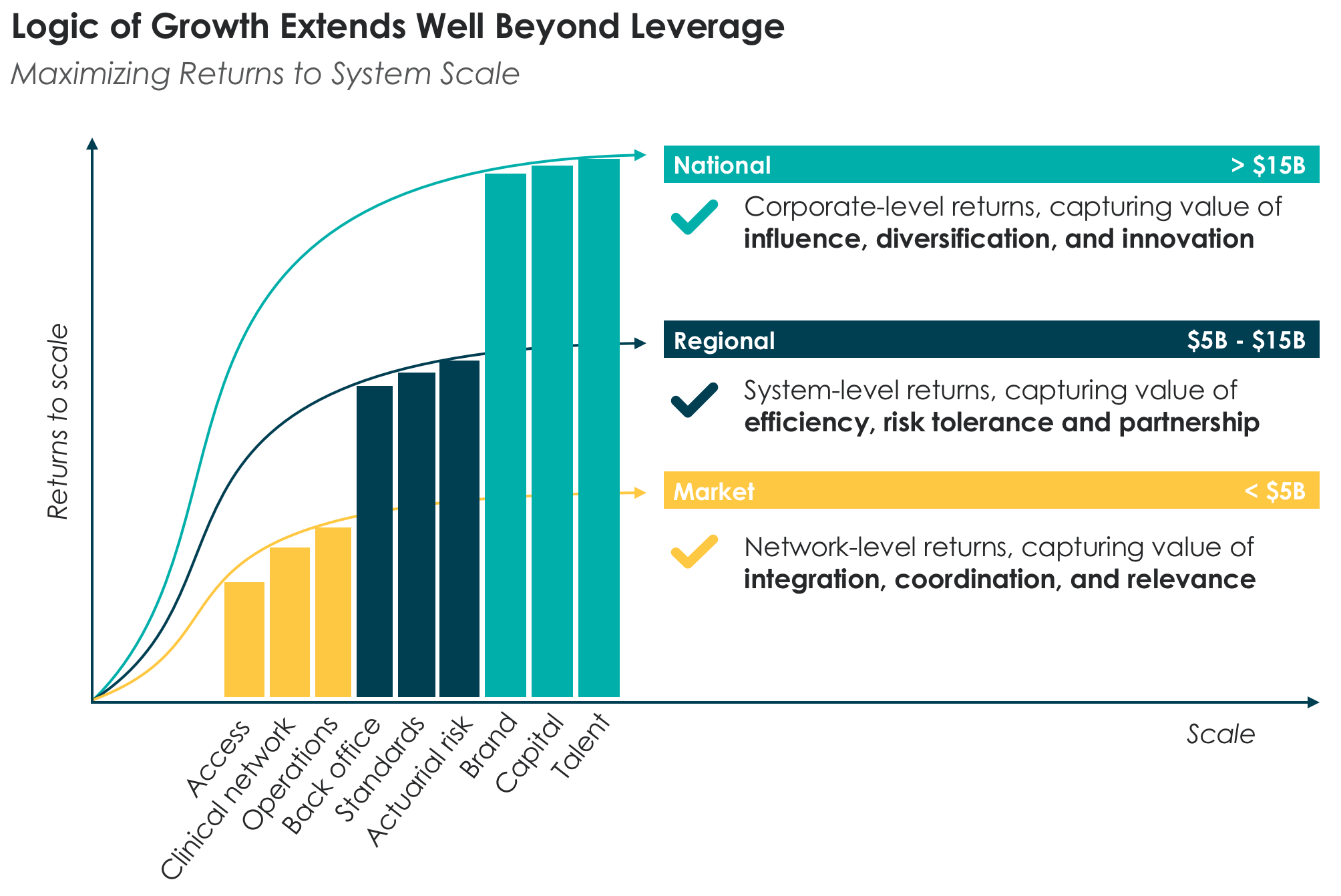 As the pace of mergers quickens, and health system leaders get caught up in the race to identify and enter into new and larger combinations, there’s a real risk that integration and execution efforts will lag behind. The work of capturing returns to scale and the potential value of mergers is hard and time-consuming.

That story is playing itself out right now in many of the larger deals that have been completed recently—it’s a lot easier to do the deal than it is to commit ongoing effort to the follow-through. While the regional and national-level mergers that we’ve seen likely pose less of a threat from their potential to raise price, they do run the risk of falling down on execution, and leaving us with even less-efficient, more complex, more costly healthcare.